I've been lurking around in r/selfhosted for about a year now, spying on the apps that people self-host, and their pretty dashboards full of self-hosted apps. Over time I observed some dissent in the community. There exists a group of people that vehemently reject the use of Docker.

...what happens if the container is not maintained further? i have no desire to do that. I still prefer to install my dependencies, run the applications via systemd and set up an nginx reverse proxy. i still feel like i can interact with the process. (Reddit)

I'm a person who has never really been too fond of Docker. I like having full control of the applications I'm running, their configuration and their storage. With Docker, I've always felt like I've lost a bit of that control. (Reddit)

Reading those comments made me wonder:

Are there others out there who shares the same perspective as them?

In this piece, I outline the journey through which I found Docker and I aim to convince just one person reading this, that Docker is worth learning and using.

As performance was absolutely abysmal on the Raspberry Pi 1 Model B in my Octopi cluster, I spent a few months tuning php-fpm for performance and configuring nginx for security. I found that that process almost never works as expected. Raspberry Pi and its OS, Raspbian, differs vastly from others hosting LEMP stacks out there. Therefore, what worked on guides and tutorials are almost guaranteed to not work on my setup without significant modification.

To make matters worse, even though I commit my configuration files to git, I have had to make live changes on the server nodes to iterate quickly and eventually I lost track of how I broke the site in ways I can only imagine.

That path, almost always ends in a painful full reinstall of the LAMP stack.

A year after I built my first cluster, I built my second, Kraken, comprised of 7 Raspberry Pi 3 Model Bs and I started migrating my WordPress installation to the new cluster. Armed with my trusty Ansible playbooks, where the installation and configuration tasks were all written in stone as code, I was confident that installation of WordPress would be a breeze.

Unfortunately, in DevOps, Murphy's Law always applies:
"Anything that can go wrong will go wrong"

Turns out, what used to work in Octopi did not work in Kraken and I ended up spending 3 full days debugging the playbooks I wrote before I got just php-fpm installed and configured correctly for WordPress. Interestingly, deploying PHP seems to be a source of pain for many, though especially so for me.

The problem does not lie in installing PHP itself, but in installing all the PHP extensions that WordPress requires. To date, there is no definitive list of extensions required and/or recommended by and for WordPress. The best list I found was an answer on StackExchange posted 8 years ago with 22 extensions.

To make matters worse, each PHP extension has its own set of system dependencies, requiring certain versions of Linux libraries or packages to be installed.

A slice of my headaches

Through all my struggles with PHP, I found this (then) treasure known as Docker and then I thought it was the best invention that mankind has ever came up with.

Docker is a framework that allows containerization of applications.

Containerization is the process of bundling the operating system, application, and its configuration and dependencies into a single object called an image, which can be downloaded and run in any environment.

From Dockerfiles to Containers and Stacks

Dockerfiles are text files that fully describe your image. They contain the sequence of commands required to install and configure an application starting from a base image. The base image can be a simple base OS image like debian:buster or any other application image like php:7.2 allowing you to build off the work of others, running additional commands on top of what was already done.

Dockerfiles can optionally also contain several OS-related elements such as specifying folders to be used as mount points for volumes, as well as ports to be exposed.

Think of Dockerfiles as analogous to class definitions in programming languages.

A Docker image can be seen as analogous to objects instantiated from classes in programming terms.

Docker images can be pushed into repositories hosted on registries, the default being Docker Hub, where it can be shared as is with others who wish to install the same application and configure it in the same way.

When you think of Docker registries, think Github

Think of docker-compose files as specifying all the parameters that each function of your application code takes, that uniquely configures the entire application to your usage.

What this meant for my setup

What was a mess of installation and configuration steps for php-fpm, nginx and MySQL in my Ansible playbooks, was reduced to defining a docker-compose.yml file and running a single command.

Why should you use Docker?

If the abstractions of containerization outlined earlier hasn't convinced you yet, here's a TL;DR of all the benefits of Docker.

The common theme across arguments against the use of Docker is the loss of control. Indeed, during the early stages of using Docker, I did feel that there was some degree of control given up.

After a month of using Docker, I found out that my deployments and configuration were a lot more organized. This is especially so with Docker Swarm, which I will introduce in later piece, where I no longer needed to SSH into each machine to view logs. Configuration and code can be bind-mounted to host directories or shared storage which I can access as easily as I used to and lastly, environment variables no longer need to be defined on the host machine.

The most important reason to use Docker

In my opinion, the most important reason for me is this:

Most if not all popular software out there have a Docker image available for use, and that greatly simplifies the installation process.

If you intend to do any kind of self-hosting, knowing Docker is crucial in saving yourself from sleepless nights spent debugging your work.

Even if you don't intend to self-host, assuming you're in the tech field, be it as a Data Scientist or a Backend Software Engineer, Docker is very relevant to your career and will remain so until software no longer has dependencies (which will never happen).

At work, Docker is used very frequently in my daily workflows, uses include:

If I were to sum up the entire piece here in a single sentence, I would tell you this:

If you are serious in working in a tech role, you should pick up Docker. 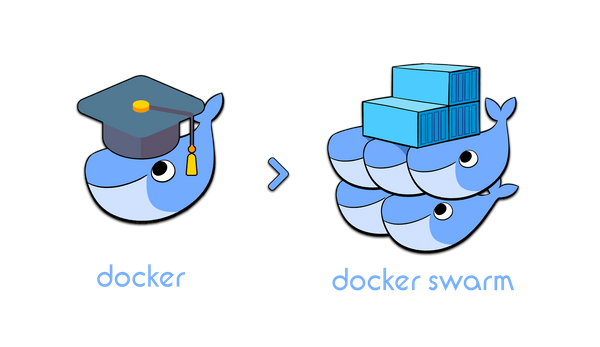 How Docker Swarm introduced me to distributed container orchestration and established the foundations for Kubernetes.